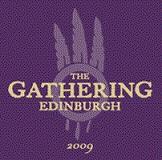 Homecoming celebrations have been held in Scotland throughout the year to celebrate the 250th anniversary of the poet Robert Burns’ birth in 1759. The Clan Sutherland Society in Scotland hosted a gathering of Sutherlands to coincide with “The Gathering 2009”, an international gathering of Scottish Clans at Holyrood Park, Edinburgh in July.

Clan Sutherland Society in Scotland greeted 83 guests from around the world on Friday afternoon, July 24th, followed by their AGM and a buffet reception in the St. Leonard’s Hall of the University of Edinburgh.

On Saturday, Prince Charles, known as Duke of Rothesay in Scotland, and his wife Camilla, Duchess of Rothesay met representatives form the clans, walked the field meeting the public, and opened the ‘games’ at noon. This was a treat for everyone there as they walked slowly towards the arena for the opening ceremony. During the day in the games field not only field and track events took place, but many other entertainments were going on. For one, the “Red Hot Chilli Pipers” made a feet stomping impression for young and old. Various “taste of Scotland” food items were being displayed and sold while the piping competition droned and the Highland dancers trod the boards. An estimated 47,000 people attended the Highland Games on Saturday. Probably at least a thousand came to the Clan Sutherland tent that day.

In 2007, for the first time, the Clan Sutherland Society of North America’s Annual General Meeting was not held in conjunction with Highland Games. Instead, there was a gathering in Acme, Washington for a Sutherland Summer Ceilidh.

There were about 125 in attendance that day, from Alaska, New Hampshire, Massachusetts, North Carolina, Oregon, California, Arizona and Canada. By all accounts, it could not have been better!

The event was held in a wooded setting, and featured dancers Kyra Sutherland (11) of Washington and Jesse Sutherland (12) of North Carolina, the Bellingham Pipe Band, the popular Celtic band Maggie’s Fury, musicians Anna Schaad and David MacVittie, and a fireworks display. The event concluded with those in attendance joining in a rendition of Auld Lang Syne.

A Clan Sutherland Society gathering was hosted by the Atlantic Association of Clan Sutherland in conjunction with the International Gathering of Scottich Clans in Halifax, Nova Scotia in July 2007.

Highlights included Seeing the 78th Highland Regiment parade, pipe and demonstrate artillery at The Citadel, one of Canada’s most visited national historic sites, a reception at City Hall, hosted by The Hororable Peter J. Kelly, Mayor of Halifax, the Royal International Nova Scotia Tattoo, Highland Games, a barbeque, and a visit to the Hector, a reconstruction of an emigrant ship to leave Scotland that arrived in Pictou in September 1773.

An international gathering of Clan Sutherland was hosted by the Clan Sutherland Society of North America on October 15-19, 2003. The event was held in conjunction with Stone Mountain Games in Atlanta, Georgia. The events included a formal dinner with entertainment and a presentation by Rt. Hon. Robin Blair, Lord Lyon, King of Arms of Scotland.

In September 2001, the Clan Sutherland Society of Scotland hosted an international gathering of Sutherlands. The event was attended by Sutherlands from Australia, Austria, Canada, England, New Zealand, Scotland, Switzerland, the United States and a Clan Sutherland pipe band from Germany.

Activities included a day trip north to Orkney to see Skara Brae, the Italian Chapel, Ring of Brodgar, St. Magnus, Scapa Flow and other sites. There was a tour and a dinner dance at Dunrobin Castle, parade of pipe bands, a ceilidh at Carnegie Hall, genealogy seminar, a church service and more. The gathering was a delightful event, and we Sutherlands in North America would like to thank the Clan Sutherland Society of Scotland for being such marvelous hosts.