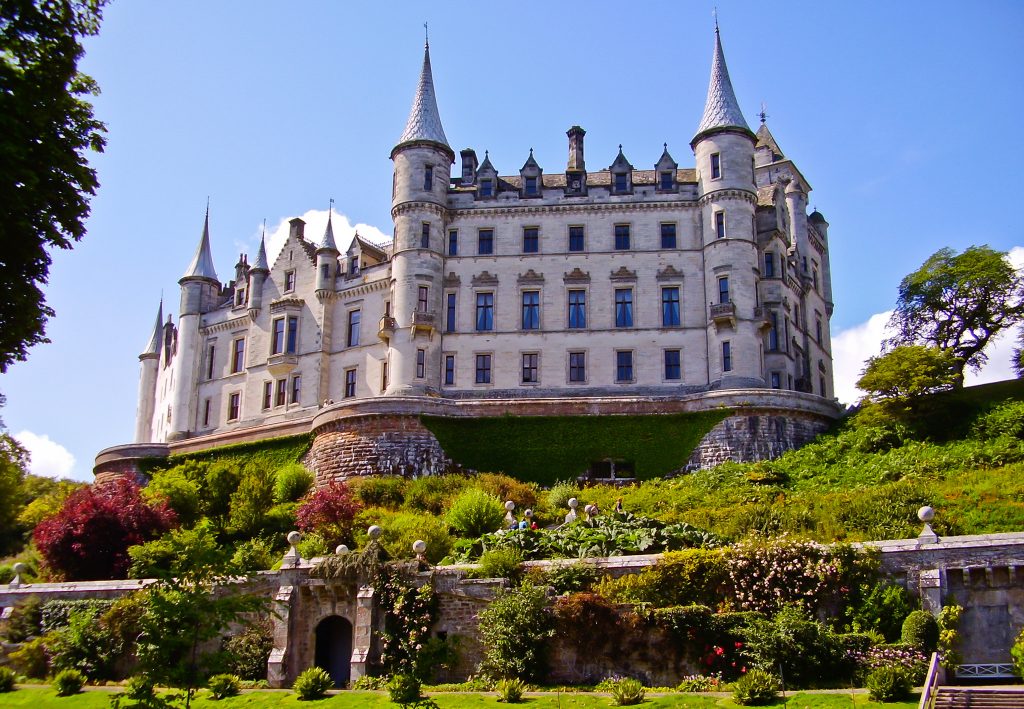 Dunrobin Castle is the seat of Clan Sutherland. The oldest part dates from the late 13th century and was first mentioned as a stronghold of the family in 1401. The name “Dun Robin”, Gaelic meaning Robin’s hill or fort, may have come from Robert, the 6th Earl of Sutherland who died in 1427. The 13th century “keep” is no longer visible from the outside of the castle but can be seen from the corridor windows. The “keep”, with walls six feet thick and a vaulted ceiling, stood isolated for some 200 years until a new staircase and a long high house were added. It was encased by a series of additions from the 16th century onwards. In 1785 a large extension was constructed.In the 1845, Dunrobin was extensively remodeled by the architect Sir Charles Barry, who had designed the Houses of Parliament. This renovation encased the early castle and gave the castle most of its current appearance with the conical spires. The massive baronial residence was inspired by Queen Victoria’s new residence at Balmoral. Barry also laid out the gardens in the 1850s. After a fire in 1915, the Scottish architect Sir Robert Lorimer conducted repairs and altered the top of the main tower and clock tower at the north side of the building to the Scottish Renaissance style.

Dunrobin is in Golspie, Scotland, making it the most northerly of Scotland’s great houses. The castle has 189 rooms, many of which contain opulent collections of furniture, art and family memorabilia. Among the rooms at Dunrobin is the “Clan Room” that includes a computer on which family trees can be entered. The estate also features magnificent gardens, falconry displays and a museum with items including ancient Pictish carved stones.

Dunrobin Castle is open to the public for tours.
The hours are: