For those who may like to know a little about army regiments that have carried the name Sutherland, let us start at the beginning of the eighteenth century.

Not for the first time and not for the last time, Britain was in fear of a French invasion in the 1750s. To counter this threat, a number of Fencible Regiments were raised. These Fencible Regiments were intended solely for the defense of the realm. On 11 August 1759, Prime Minister William Pitt (the elder) commissioned William, 18th Earl of Sutherland to raise a battalion in his Clan territory. This the Earl duly did and the regiment was known as the Earl of Sutherland’s Battalion of Highlanders, or First Sutherland Fencibles. On the initial roll of officers commissioned by the Earl, three Captains, a Captain-Lieutenant and four Ensigns were all called Sutherland. Later, three more Sutherlands were commissioned as officers in this regiment. The Earl selected a thousand men out of fifteen hundred volunteers living in Sutherland and Caithness. Two hundred of them were said to be more than six feet tall. A little later, another company of one hundred men was recruited. The duties of the First Sutherland Fencibles were restricted solely to Scotland. They were disbanded after the Peace of Paris in 1763.

It was an uneasy peace. In 1778, the French came out openly on the side of the colonists in America who were seeking independence from Britain. Spain sided with France and laid siege to Gibraltar. Invasion of Britain was once more a potent threat. The regular army was fully stretched abroad, so reliance for the defense of the realm was again placed on raising fencible regiments. A second regiment of Sutherland Fencibles was raised by William Wemyss of Wemyss (1760-1822) in 1779. Wemyss was a career soldier, the cousin of the then Countess of Sutherland and grandson of William, 17th Earl of Sutherland.

Initially, the lieutenant-colonelcy of the Second Sutherland Fencibles went to Nicholas Sutherland (d. 1781), who had fought in America, had negotiated the surrender conditions of the British forces after the Battle of Saratoga (16 October 1779) and had been taken prisoner-of-war at Cambridge, Massachusetts. Nicholas’s company lieutenant was Alexander Sutherland (died. C. 1810) and, in this company, the Sergeant, a Corporal, two drummers and thirteen Privates were all called Sutherland. After Nicholas’s death, the lieutenant-colonelcy was taken over by James Sutherland of Uppat (c. 1726-1789), promoted from Major in the regiment. As well as Nicholas and James, originally there were three Captains, five Lieutenants and two Ensigns in the regiment, all with the surname Sutherland. Later all four Sutherlands were commissioned as Ensigns. As with the First Sutherland Fencibles, the Second comprised one thousand men, all of them recruited from the Countess of Sutherland’s estates. Again, regimental duties were confined to Scotland. The regiment was disbanded in 1783, following the Treaty of Versailles.

The next threat to British shores came from Napoleon. So a regiment of Sutherland Fencibles was raised for a third time in March 1793 – again by William Wemyss of Wemyss. Wemyss’s commission required him to raise six Battalion Companies, a Grenadier Company and a Company of line infantry. The Battalion companies were smaller than previously. They consisted of a Captain, a Lieutenant, an Ensign, three Sergeants, three Corporals, two Drummers, two Pipers and sixty Privates. Initially, the regiment numbered 1,084. It was raised in Ross-shire, in addition to Sutherlandshire. Initially, those officers called Sutherland included Major George Sutherland of Rearquhar (1720-1816), a Captain, a Captain-lieutenant, three Lieutenants and an Ensign. Later, eight more men called Sutherland became officers in this regiment.

In March 1794, the Third Sutherland Fencibles came close to mutiny. They objected to a proposal that they should be posted in England. They said, quite correctly, that they had been enlisted to serve in Scotland. The projected posting was dropped. Three years later, the regiment again came close to mutiny. This time objecting to the brutality of their Adjutant (not called Sutherland), who had served below the officer rank in the Black Watch for upwards of twenty years. Fortunately, the regiment’s Colonel, William Wemyss, was successful in pacifying tempers.

Although there had been objections to service in England, in 1794, part of the regiment later accepted a posting to Ireland, without demur. They became engaged in a skirmish with Irish rebels. The regiment was disbanded at Fort George in 1798, only to be re-formed the following year as a regular regiment, first known as the 93rd Regiment of Foot, and later known as the Sutherland Highlanders.

Again it was William Wemyss who raised the Sutherland Highlanders. By now he was a Major General in the regular army. He was authorized to raise a regiment of 600 men drawn, as far as possible, from the recently disbanded Third Sutherland Fencibles. Thus, many of the new intake would be experienced soldiers. Later the number was increased to 800, and then up to 1,000 men. Wemyss had a census taken of all able-bodied men living on the Countess of Sutherland’s estates. He then had them lined up for inspection, parish by parish, selected those he thought suitable and issued each of these a pinch of snuff, a dram of whiskey and their bounty money. When the regiment first mustered, in Strathnaver in August 1800, not a single man selected by Wemyss failed to report. There is a cairn at Skail, in Strathnaver, marking the spot where this muster took place. The new regiment marched to Inverness, was inspected, passed fit for service and was numbered 93rd in seniority. Colloquially, it was known as Major General Wemyss’s Regiment of Foot, it was not until 1861 that it was officially dubbed the Sutherland Highlanders. At the outset, the regiment was considered to be more highland in its composition than any other Scottish regiment in the regular army. It was said that all the officers and other ranks knew one another or, indeed, were related. Two Captains, a Lieutenant, an Ensign, two Sergeants, two Corporals, a Drummer and fifty-five Privates all bore the surname Sutherland. Two hundred and fifty of the men had had previous service in the Third Sutherland Fencibles. 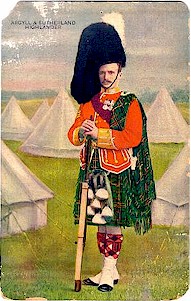 Prior to the raising of the 93rd, Duncan Campbell of Lochnell had raised a regiment in Argyllshire, first called the 98th Argyll Highlanders, but later renumbered the 91st in 1798. After a major reorganization of the army in 1881, the 91st Princess Louise’s Argyllshire Highlanders and the 93rd Sutherland Highlanders were merged to form Princess Louise’s Sutherland and Argyll Highlanders. In the following year, the names of the two counties were reversed and the regiment became the Argyll and Sutherland Highlanders, often known simply as the Argylls. The county of Sutherland was no longer a recruiting ground for this combined regiment; it was the Seaforth Highlanders (Ross-shire Buffs) which recruited, amongst other areas, in Sutherland clan territory.

At another major reorganization of the army in 1961, the Seaforth Highlanders amalgamated with the Cameron Highlanders, to become the Queen’s Own Highlanders, whose recruiting area comprised virtually all the highlands and islands north of the Great Glen. Then, in 1994, there was a further amalgamation and today’s regiment is known simply as The Highlanders.

In its eighty odd years of individual entity, the 93rd Sutherland Highlanders served in South Africa, in the New Orleans Campaign of 1814, in the Crimea, in Ireland and in India. There were also, of course, duties at home, including the quelling of a rebellion by the boys of Winchester College – “forty men of the 93rd advanced at the double against the boys, who thereupon fled in panic”. Two outstanding examples of valor of the highest order occurred at Balaclava, in the Crimea, and at Lucknow, in India.

On 25 October 1854, the Sutherland Highlanders faced down and repulsed a charge by the Russian cavalry, in a magnificent stand. A Russian cavalryman commented, “We expected to have to fight soldiers, but not red devils”. The action was commemorated in several paintings including Robert Gibbs’ The Thin Red Line. Three years later, seven officers and men of the Sutherland Highlanders were awarded the Victoria Cross for bravery during the recapture of Lucknow from the Indian mutineers.

The name Sutherland has been carried by at least one overseas regiment, the Argyll and Sutherland Highlanders of Canada (Princess Louise’s). It has figured far more frequently in Militia and Volunteer units raised in the county, and in a Territorial Battalion of the Seaforth Highlanders. This later was called the (5th) Sutherland and Caithness Highland Battalion, and saw service in South Africa and later in World War I. Cromartie Sutherland-Leveson-Gower, 22nd Earl and 4th Duke of Sutherland (1851-1913) and subsequently his eldest son, George Granville Sutherland-Leveson-Gower, 23rd Earl and 5th Duke of Sutherland (1888-1963) were Honorary Colonels of the Battalion. At least three more officers were called Sutherland.

A militia regiment raised in the north of Scotland in the early nineteenth century was called Ross, Caithness, Sutherland and Cromarty Militia. It had at least three officers with the surname Sutherland. Later it became the Highland Rifle Militia, and later still the 3rd Battalion of the Seaforth Highlanders.